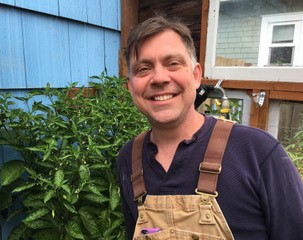 Christian Smith has been the District Manager for the Foster Business District since the summer of 2021.  Christian not only works, but lives in the Foster area. Christian says, “The opportunity to help uplift and promote small, independent businesses in his own neighborhood really is its own reward.” Having bought his home in 2005 in the Foster-Powell neighborhood, his initial impression of the district (before it was a district) was that it was a pretty rough and tumble area, but it had good bones and a lot of potential. Nowadays, Christian feels like his district is doing pretty good for an up-and-coming commercial corridor but there’s room for improvement as Foster’s vacant/derelict buildings slowly get redeveloped.  The heart and soul of the Foster Business District can be found between SE Holgate Blvd. and SE 67th St. This was the hub of commercial activity in the area a century ago when the surrounding neighborhoods were still streetcar subdivisions. Many of the same old buildings are still in use and really help give the area some character.  When asked if there is a theme for the Foster Business District, Christian says, “With five pizzerias, we like to joke about Foster being the ‘Pizza Corridor.’” 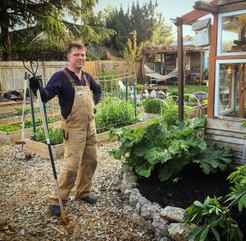 Christian is currently working on starting up a series of maker’s markets to showcase women and BIPOC-owned craftsperson businesses in the newly remodeled Laurelwood Park at the intersection of SE Holgate Blvd. and SE Foster Rd.  He feels both Foster residents and businesses will have a pretty good summer if he can pull off the “First Saturday” market series.  Christian says, “Foster is definitely on the up-and-up,” and people he’s talked to in the business community are pretty optimistic about this summer, too.

When not working in the Foster Business District, Christian has a wide range of hobbies. He describes himself as, “just a simple man trying to make his way in the Universe.” Not only will you find Christian in his garden, planting, plucking, and enjoying the fruits of his labor, you can also catch him racing his self-built car at the PDX Adult Soapbox Derby at Mt. Tabor Park on Saturday, August 20th.